For the first time in U.S. history, heroin overdose deaths outnumber those of gun homicides.

Mississippi drug overdose deaths have reached a record high — boosted in part by heroin, sometimes laced with the even more dangerous fentanyl.

“Mississippi is emerging on the brink of a super pandemic,” said state Bureau of Narcotics Director John Dowdy.

In 2016, Mississippi saw at least 211 deaths from drug overdoses — the highest in state history.

Dowdy derived that number from death certificates. He suspects the real number is much higher as evidenced by drug tests, which would increase the deaths to 220 (with oxycodone detected in 45 deaths and fentanyl detected in 33 deaths).

But not every coroner uses the state Crime Lab, Dowdy said. The state Department of Health puts the number of drug poisoning deaths, excluding homicides and suicides, at 274.

Marshall Fisher said heroin had almost vanished from the landscape when he moved in 2003 to Mississippi to head the Drug Enforcement Administration office.

Fisher said the only heroin cases he saw then were when authorities busted cars heading for other places, such as Chicago and Atlanta.

In 2011, he began to witness a wave of overdoses involving opioids — a family of the often addictive painkillers derived from the morphine molecule, including morphine, fentanyl, oxycodone, hydrocodone and their illicit cousin, heroin.

Mississippi is one of a handful of states where there are more opioid prescriptions than there are people.

In fact, the state prescribes so many opioid painkillers that each man, woman and child could swallow a pill a day for 67 days without running out.

More Americans die each year of drug overdoses than died during the entire Vietnam War.

“It’s like two jumbo jets going down every week,” said Fisher, who now heads the state Department of Public Safety. “Would we accept that from the airline industry?”

To help stop what he calls a “scourge,” Gov. Phil Bryant has formed the Opioid and Heroin Study Task Force. Congress has approved $3.58 million to the state Department of Mental Health to aid in that fight.

Dowdy said many of those addicted to opioids are switching to heroin as a cheaper alternative, pointing out that seizures testing positive for heroin at the state Crime Lab were 67 in 2012 and are expected to top 400 this year, if the current trend continues.

One of the governor’s task force members, family practice physician Dr. Randy Easterling of Vicksburg, said he hardly saw a heroin addict years ago. Now he sees two or three a day. 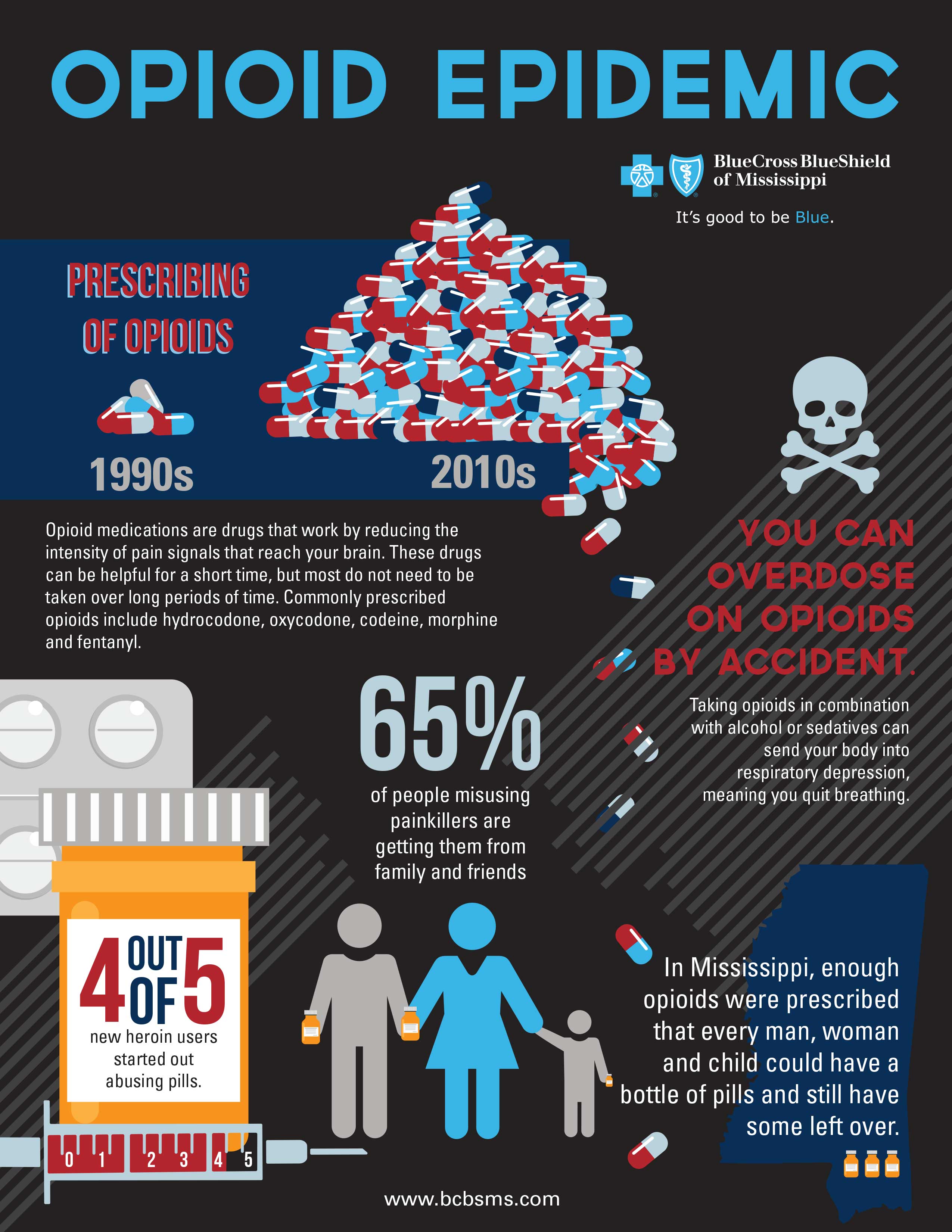 But he believes there is an even more dangerous threat these days than heroin and that is fentanyl, which is 50 times stronger than the illicit drug. The prescription drug, sold in timed-release skin patches, is available only to cancer patients suffering from breakthrough pain.

Addicts abuse the patches by melting them, he said. “It’s a long-lasting opioid, so the effect on the body is erratic.”

Mexican cartels are now lacing heroin with fentanyl, in part because the painkiller is cheaper to produce than heroin, he said.

“The fentanyl is being made in China. You don’t know what you’re getting,” he said. “Then it’s being mixed with heroin that you don’t know where it’s from. People are dying.”

The Centers for Disease Control and Prevention reports that deaths from fentanyl have increased 75 percent over the past year. One of them was the music legend Prince.

d 75 percent over the past year. One of them was the music legend Prince.

In Mississippi, Dowdy is working to keep heroin and fentanyl off the streets. “The $50 million question is, what are we going to do when we’re like an Ohio?” he asked.

Ohio leads the nation with thousands of opioid overdose deaths a year. One coroner’s office became so backed up with corpses it had to call up a local funeral home to hold the extra bodies.

In Mississippi, the number of people treated for heroin addiction has more than tripled over the past three years, going from 99 to 306, according to the state Department of Mental Health.

“We are mirroring the national trend,” Dowdy said.

In four years, heroin-related overdose deaths in Mississippi have skyrocketed from one in 2011 to 35 in 2015.

To combat overdoses, Mississippi lawmakers approved a bill that provided legal immunity to first responders who administer naloxone or similar drugs to reverse an overdose’s effects.

But the bill included no funding to provide responders with the drug, which retails for about $125 for two doses.

Southaven native Branden Cooper, 24, was addicted to heroin for years before finding recovery.

At age 8, a relative got him drunk, and a year later introduced him to marijuana. On his 11th birthday, that relative laid out lines of cocaine for his birthday.

He and his 12-year-old sister, Jessica, began using opioids and other drugs.

A few years later, he rode with his sister to buy 14 Xanax bars. He said the dealer had run out of most of them, but offered “something that’s just as good, and it’s a lot stronger.”

That drug turned out to be heroin. “It was the first time for us to shoot heroin together,” Cooper said. “My sister and I fell in love with it the moment it entered our system.”

In that moment, he said, “it was like everything ceased — the pain, all the troubles we didn’t want to talk about, everything. We finally felt that moment of peace.”

From that time on, they pursued that promise of peace, but found none, bouncing in and out of hospitals, rehab centers and jails.

In 2015, he finally found sobriety, but his sister continued to struggle. On Dec. 1, just after returning to Mississippi following a stint in a Texas rehab, she overdosed on heroin.

Cooper thinks often about his sister as he works with recovering addicts at Turning Point recovery center in Southaven. He serves as alumni coordinator for Addiction Campuses.

For him, it is a way to try and save those like his sister, caught in the spiral of addiction.

“I tell those in the program to do the next right thing because there are more people who love you than you know,” he said. “That was what I didn’t know.”

Jackson native Kostas Matheos started in the recovery field in 1999 in Santa Fe, where heroin was so out of control it was sold out of a white trailer with a drive-through window. Even fourth-graders were shooting up.

In 2006, she returned to her hometown and started the Bridge to Recovery in Ridgeland.

Now the same heroin she encountered at the start of her career is overwhelming clients.

“I’ve come back home to Mississippi, and now this is most of what I treat,” she said. “It all starts with Mom’s Lortabs or Dad’s Percocets in the cabinet.”

Many heroin addicts these days fit the same profile — “middle- or upper-class, Caucasian, private school, fraternity kids,” she said. “Initially, they take a couple of pills.”

They become hooked, she said, and when they are unable to get pills and feel “dope sick, that’s when they find heroin.”

In most overdoses she said she has seen lately, “the heroin has been laced with fentanyl.”

All this is coming at the time that governments are cutting funding for drug treatment, recovery and mental health, she said, adding the lone center in Jackson, where addicts could get off drugs, New Vision, closed recently.

“Here we are the capital of our state, and there’s nowhere for a person to be detoxed,” she said.

The other day, she started counting all the funerals she has attended of those who died at the hands of addiction, she said. “I thought, ‘Oh, my God, I’ve been to more funerals over the past two years than the other 16 years combined.’”

Dowdy would like to see Mississippi adopt a law similar to a federal statute, which allows a life sentence for drug dealers when their drugs kill users.

Easterling, who serves on the state Board of Medical Licensure, would like for the oversight boards for doctors, dentists and nurse practitioners to unite on tougher standards for opioid prescriptions.

Fisher would like to see Mississippi physicians required to check as well.

“We must educate our citizens that all pain doesn’t need to be managed by opioids,” he said. “Tylenol and Advil work fine in many instances, according to physicians I talk with.”

There must be a shift in thinking, he said. “Insurance companies and Medicaid should consider treating people suffering from the disease of addiction as if it is any other disease.”